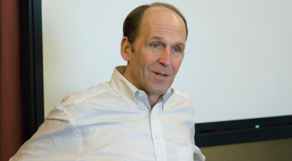 The man in this photo is Stephen Burbank. He is a professor at the University of Pennsylvania Law School. You can see his faculty page here. His Wikipedia entry includes this bit of info:

In November 2002, a federal court appointed Burbank special masterof the National Football League. In that role, he resolves certain categories of disputes between the NFL Players Association and the NFL Management Council under a consent decree and collective bargaining agreement.

Yesterday, Professor Burbank issued a ruling in a dispute between NFL owners and the NFLPA. In this dispute, which I wrote about last summer, the NFLPA claimed that the league negotiated the terms of its television contracts in bad faith, asking for less money than it could have gotten in exchange for guaranteed contracts. The NFLPA asked that the money, estimated at $4 billion, be put into an escrow account until a new collective bargaining agreement is established.

Professor Burbank ruled against the NFLPA. The league and its owners are free to collect that TV money.

Thus, for all intents and purposes, Professor Burbank has ruled in favor of the cancellation of the 2011-12 NFL season. He has given the owners a $4 billion war chest that it can use as leverage against the players. He has given the owners free reign to lock out players unless they agree to play more games for less money and fewer benefits. He has allowed the owners to shut down operations for a full year starting March 4, taking millions of dollars out of the economies of 32 major cities, 4 major television networks and countless other workers and businesses that rely on the NFL for at least a portion of their livelihoods.

In short, Professor Burbank is a douche.

The NFLPA has already stated its intent to file an appeal in U.S. Federal District Court in Minneapolis, where Judge David Doty presides. The NFL has issues with Judge Doty. Three years ago, the league demanded that he remove himself from his role as overseer of the league’s CBA after he ruled that Michael Vick could keep a large portion of his bonus money. Naturally, the league claims he is biased in favor of the players, while the NFLPA clearly hopes for a more favorable ruling on appeal. If you want NFL football next September, you should hope for the same, because as of right now, Super Bowl XLV will be the last NFL game you see for a while.