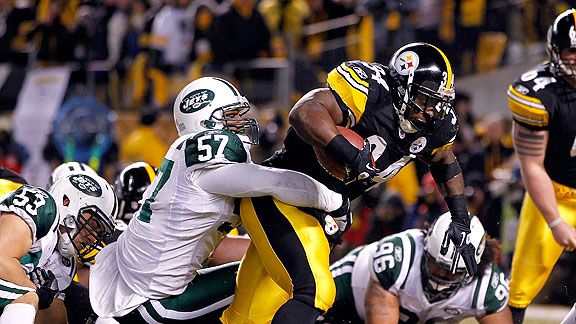 Pittsburgh safety Troy Polamalu intercepted Jets QB Chad Pennington with 5:25 left in the first quarter, which set up the Steelers for a field goal, the only score of the game so far.

The story so far: Jets penalties. 12 penalties for 84 yards, to be exact. Several penalties on defense nullified big plays — including one Illegal Contact penalty that cancelled out a Hines Ward fumble recovered by the Jets — and kept the ball in the Steelers’ hands. The Jets had several false start penalties on offense as well. Home field advantage is a good thing to have today.

Otherwise, both defenses look playoff-ready. The Steelers were doing very well on defense until the last three minutes of the half, when the Jets finally broke into Steelers territory. An offensive pass interference penalty, however, backed New York up to the 40, and James Farrior intercepted Chad Pennington on the very next play. Again, Jets penalties.

On the other hand, Pittsburgh’s offense is struggling, thanks to a Jets’ pass rush that is remarkably fast and giving Ben Roethlisberger all he can handle on the pass rush. They don’t look like they miss John Abraham all that much after all.

This is going to be a rough second half. If the Jets can stop making mistakes, they will have a shot in this one. Meanwhile, the Steelers need to make something happen on offense, and soon. They get the ball first in the second half. We’ll see how it goes…