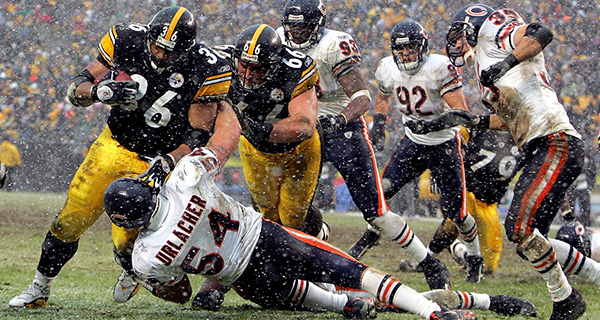 The Steelers, meanwhile, need no enthusiasm transfusion. They know they need to win this game, and right now, they’re going out there and winning it.

So far, the Steeler D has held Thomas Jones to 32 yards on 10 carries, while Kyle Orton is 9-for-20 for 92 yards. If Orton is throwing 20 times before halftime, though, that’s not a good sign for the Bears. A lot of those passes down the field are not going where they should.

Ben Roethlisberger is doing better, completing 8 of 12 for 130 yards and a TD to Hines Ward. Six receivers are on the board for Pittsburgh, so Big Ben is finding different targets effectively. Willie Parker, meanwhile, is having his best day in weeks, with 48 rushing yards and 45 receiving yards. The screen pass worked well for him early. They need to run that screen a little more often.

It’s the defense that’s making its statement today, though, and as long as they keep Jones bottled up and Orton on the run, Pittsburgh could come away with a W — which won’t do a thing for Carolina unless they can regain their energy in the 2nd half…

Jaguars defense gets the gas face