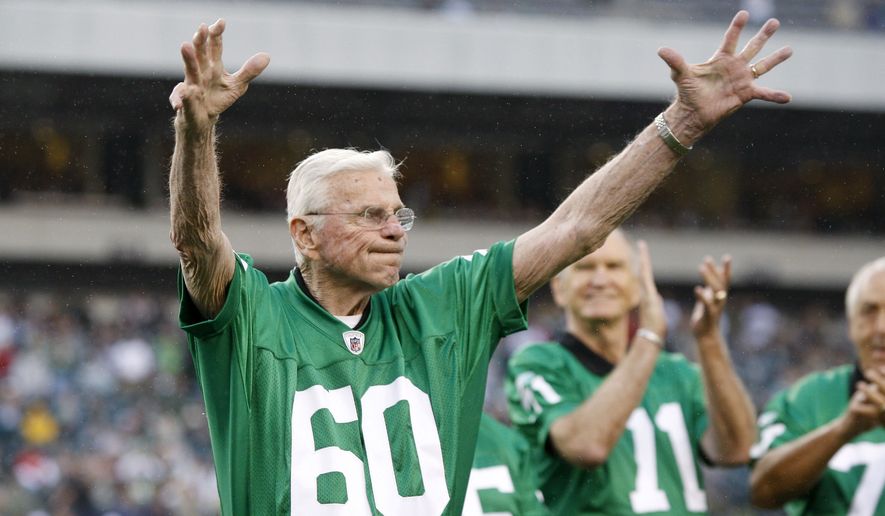 Chuck Bednarik played both center and linebacker for the Philadelphia Eagles from 1949 to 1962. He played for the Eagles the last time they won the NFL Championship in 1960. Today, he said he’s rooting for the Eagles to lose on Sunday.

Aside from being obviously jealous about current players and their salaries — “Back in my day, we played both ways, every play, and got pounded into putty! We never got a soup commercial, and we only got paid 27 grand! That’s the way it was, and we liked it!” — Bednarik has beef with Eagles owner Jeffrey Lurie. Check this out…

Bednarik wanted Lurie to give the books to the team. He says Lurie refused because the Eagles aren’t allowed to give the team gifts.

Bednarik has since distanced himself from the Eagles, only reluctantly showing up for a reunion because the organization surprised him by agreeing to his demand for a limousine.

Is he serious? He walked into the owner’s office and said, “Buy 100 copies of my book,” and when they said no, he turned his back on the whole team?

“Hmmm… You know what? I think we’ll risk your enternal scorn, pops. Have a nice day.”

Sure, the NFL probably doesn’t do enough to help its retired heroes, but to be bitter at your team because the current owner wouldn’t buy 100 copies of your book? Dude. Maybe it’s possible that they really couldn’t give players gifts? Maybe you could have worked something else out with Lurie? Or the publisher? It’s not like the Eagles turned their back on you. They sent you the limo, didn’t they? Did all those hits during your career damage the part of your brain that allows you to get a clue?

On the other hand, Bednarik was right about one thing. “The positions I played, every play, I was making contact,” he told a reporter. “Not like… Deion Sanders. He couldn’t tackle my wife.” Heh.

Meanwhile by the Bay…