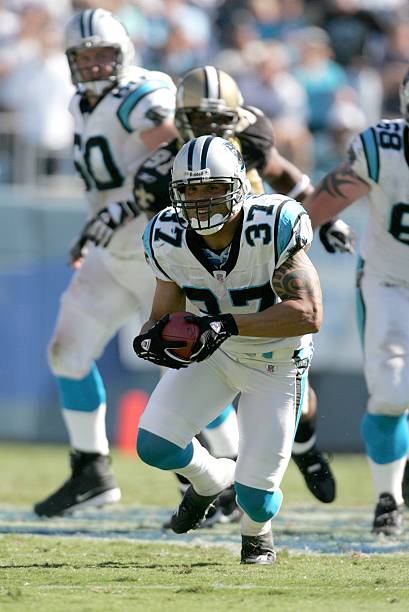 How out of it were the Panthers today? With less than 5 minutes left and Carolina desperate for points, Jake Delhomme threw the ball to Nick Goings on 4th & 23… and Goings stepped out of bounds short of the 1st down. He didn’t know what down it was.

Mike Rucker’s absense was felt today on defense. Chris Simms wasn’t pressured much at all today, and he nickel-and-dimed Carolina all day, finishing with 20 completions on 27 attempts, and some of those incompletions were drops. Cadillac Williams had a huge day on the ground, too — 29 carries for 112 yards and 2 TDs. Think that would have happened with Rucker in the lineup?

As for the Bucs defense, they all but stuffed the Panthers running game, holding DeShaun Foster to 3 yards in the second half before Foster ran into the locker room. Seriously, can Foster stay healthy for more than one game at a time? Steve Smith did all he could today — 103 receiving yards, at least half after the catch, and 55 punt return yards — but the rest of the team suffered the dreaded letdown today.

Ronde Barber made two big plays in the 4th quarter — an early interception that killed a Carolina drive deep into Bucs territory, and a late 3rd down sack that all but sealed the deal for Tampa Bay. Barber is now the only corner in NFL history with at least 20 sacks and 20 picks. No gas face for Ronde Barber.

Big gas face for the Panthers, though, who fall to 2nd place behind the Bucs based on the division record tiebreaker. That puts the Panthers into the #5 seed. How the rest of the seeds play out today remain to be seen…

Stat of the day