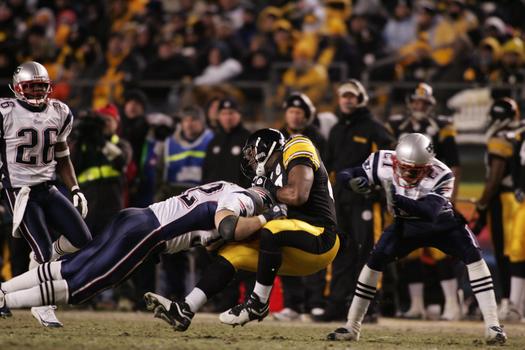 1.) Pittsburgh wins the tiebreaker for the top seed, thanks to their Week 8 victory over New England.

2.) San Diego wins the tiebreaker Indianapolis by virtue of a better conference record. (San Diego is 7-2 in the AFC, while the Colts are 6-3.)

Not much has changed in the AFC playoff picture after Week 14, though much has been confirmed. The Steelers clinched the AFC North by beating the Jets and remain in contention for home field advantage throughout the playoffs. The Patriots also clinched the East, thanks to their win over the Bengals (who fell out of the picture) and the Jets’ loss in Pittsburgh. The Colts, meanwhile, clinched the AFC South with a win over the Texans. As for the Chargers, they are two games ahead of Denver with three to go, so it would appear just one more win would do it for them.

A lot of big games remain in the last three weeks to determine playoff position. The biggest games may be in Week 16, when San Diego goes to Indy, the Jets host the Patriots, and the Steelers get one more shot against the Ravens, the only team that’s beaten them this season. There is much left to be decided.

Boy, ESPN landed a winner here — the number one offense in the NFL vs. the most feared defense in the league. Can Peyton Manning break Dan Marino’s record for most TD passes in a season, or will Ray Lewis and Ed Reed find a way to shut this high-flying offense down? This one will tell us volumes about what might happen in the playoffs.

With Baltimore facing a tough opponent on the road, the Broncos have a chance to climb back into position for the last Wild Card spot. However, Denver struggled against lowly Miami in Week 14, and this opponent has a pretty powerful offense in its own right, with or without Priest Holmes. We’ll see what these Broncos are made of here.

A big one for both teams. The Jets are still in position for the first Wild Card spot, and they will need this one to keep pace. Seattle finally found a backbone in Minnesota, though, so it will be interesting to see if their offense can outrun New York’s speedy D.

The Jags took care of business against the Bears, but can they overcome the mystique of (*ahem*) “The Frozen Tundra of Lambeau Field?” Oh, and they face a Packers team looking to extend the lead in their own division. This game will prove one of two things: either there really is a huge gap between the AFC and NFC, or the Jags really are, like everyone says, a year away.

Tell me this game doesn’t scream “trap.” With a road date against the Colts looming, the Chargers cannot afford to let up here. A win gives them the AFC West and sets up the showdown in the Hoosier Dome the following week.

Unfortunately for the Bills, even if they win out, they’ll need a boatload of help to sneak into that last Wild Card spot. They aren’t going to get it from the Bengals, who nearly beat the Pats in their house. If Carson Palmer’s knee hadn’t gone “pop,” they might have had a better shot at it, too. Palmer will get an MRI this week to determine whether or not he can play. The more important question, though, is whether either team can stop the run. Rudi Johnson and Willis MaGahee both have been running wild lately.

The quest for home field advantage continues. Both games look like fairly easy wins for the Steelers and Pats, but they could also be trap games like Chargers at Browns. Look at the trouble the Dolphins gave Denver last week. Nothing is ever easy in this league.

John Clayton, master of the obvious